Lumbar Puncture in Neonates with Sepsis

Introduction:Infections are one of the main causes of death during childhood. According to epidemiological studies in Iran, the incidence of neonatal sepsis was 1.8% in year 1995. Moreover, the incidence of neonatal meningitis was 0.2 to 0.4 in 1000 live births. The aim of this study was to determine the necessity of lumbar puncture (LP) for early neonatal sepsis.
Methods:In a retrospective study, after obtaining the ethical approval, we evaluated the records of 1100 neonates younger than 7 days, who were admitted to the hospital in 2001-2007 with sepsis suspicion; all the subjects had undergone LP. Statistical analysis was performed using SPSS version 16. Nominal variables were compared by Chi-square or Fisher’s exact test. Other parametric and non-parametric tests were carried out, as required.
Results:In our study, 1100 neonates suspected of sepsis were evaluated. Overall, 28.3% and 71.7% of the subjects were older and younger than 3 days (male-female ratio of 1:5). In 115 neonates, sepsis was confirmed by positive blood culture and 21 neonates (2.1%) had positive cerebrospinal fluid (CFS), which was significantly associated with blood culture results.
Conclusion:There was a significant relation between blood culture and CSF culture. With regard to the low incidence of positive CSF, LP should be performed for each case, based on clinical manifestations and the clinician’s opinion. 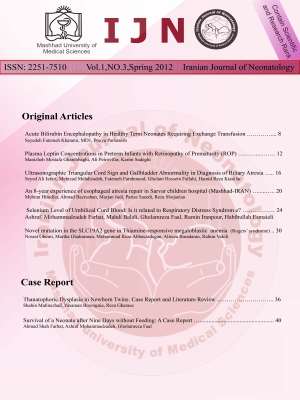