Introduction: some studies have suggested correlation between MPV index and inflammatory diseases such as rheumatoid arthritis in adults. Though bronchopulmonary dysplasia is also an inflammatory disease which develops in preterm neonates with Respiratory distress syndrome, we decided to study the possible correlation between the mean platelet volume (MPV) and the occurrence of bronchopulmonary dysplasia (BPD)
Subject & Methods: We reviewed the medical records of 280 infant with the diagnosis of RDS admitted to the neonatal intensive care unit of the Mahdieh obstetrics and gynecology Hospital of  Tehran  and  Amir general Hospital of semnan from April 2008 to April 2012. Infants who have been expired before first month of life were excluded. Enrolled infants were divided into BPD and no-BPD groups (30 with and 250 without BPD).  MPV was determined during first three days of life in all cases.
Results: MPV measured during first three days of life was significantly( p=0.017) higher in the BPD than in the no-BPD group (10.8-0.96 versus 9.65-0.91 fL)but Platelet count at the same time were similar in the BPD and no-BPD groups, and MPV  increment was associated with BPD development risk( (OR=1.6,  95%CI: 2.38-1.08, p=0.019)  .
Conclusion: We concluded that higher MPV in the first three days of life is a probable risk factor for the development of BPD in preterm infants with RDS. This might be attributed to the fact that high MPV could prone the neonate to inflammatory and oxidative lung damage.

Bronchopulmonary dysplasia (BPD) is an ominous complication of  respiratory distress syndrome (RDS)  which develops in preterm infants requiring ventilation and supplemental oxygen therapy1 .BPD was first described by Norway in 19672 .BPD incidence is inversely related to gestational age. Clinically BPD is defined as dependency to supplemental oxygen at 36 week of postconceptional age1.Pathogenesis of BPD is multifactorial. Atelectotrauma due to surfactant deficiency and ventilator induced volutrauma promote injury to lung1. Oxygen free radicals that cannot be neutralized by immature antioxidant system of the pretermInfant deteriorate lung damage. Since deposits of fibrin are seen in alveolar spaces in hystopathologic evaluation of sever RDS, the role of coagulation system in promoting BPD is probable3, and since inflammatory mediators and cells have been detected in bronchoalveolar lavage aspirates of preterm infants with BPD1, inflammatory system is also engaged in pathogenesis of BPD. Platelet has an important role in both coagulation and inflammatory systems. Some studies have shown that larger platelets are more active due to more cytoplasmic granules they have4. Some studies have demonstrated correlation between disease activity and complications with higher MPV in inflammatory diseases such as infective endocarditis5 and rheumatoid arthritis6 in adults. However, MPV has been poorly investigated in preterm infants. Only one study by Dani et al showed that MPV measured at 24 to 48 hours of life was higher in the BPD than in the no-BPD preterm infants with RDS3. In this study we hypothesized that preterm infants who have higher MPV during first three days of life are at an increased risk of developing BPD. If we could predict BPD promotion in preterm infants with RDS this may be possible to interrupt this catastrophic process by preventive measures such as weaning of ventilator more rapid and use of minimal oxygen concentrations.

We have reviewed the medical sheets of 280 preterm infants with RDS diagnosis admitted to neonatal intensive care unit of the Mahdieh Obstetrics and Gynecology  Hospital of  Tehran and Amir general hospital of Semnan, Iran from April 2008 to April 2012.Inclusion criteria was admission by RDS diagnosis. Infants who died before 28 days of life were excluded from study.30 infants with RDS were complicated by BPD but 250 infants didn’t progress to BPD. Following information were registered for all infants: Birth weight, gender, gestational age, hospitalization duration, Apgar score at 1st  and 5th  minutes of birth, rout of delivery, Intrauterine growth retardation, cardiopulmonary resuscitation in delivery room, surfactant need, ventilation mode and duration, complications occurred during admission including intraventricular hemorrhage(IVH), pneumothorax, necroziting entrocolitis(NEC), patent ductus arteriosus(PDA) and history of gestational hypertension,(GHTN) gestational diabetes mellitus(GDM) and  premature rupture of membranes(PROM)>18 hours in mother.MPV and platelet count was determined in all infants in the first three days of life by obtaining 2 milliliters of Blood for complete count  by venipuncture for this purpose. Coulter counter model ABx micros 60 Cell was used for MPV and platelet measurement .Diagnosis of RDS was made by clinical symptoms including  tachypnea,  grunting, intercostal and subcostal retraction, nasal flaring, cyanosis, and chest x ray findings including fine reticular granularity pattern and air bronchogaram1.Diagnosis of BPD was established if infant was oxygen dependent at 36 week of postconceptional age1.In this study MPV which was determined during first three days of life was compared between preterm infants with RDS who developed in to BPD (BPD group, n=30)and who didn’t  progressed in to this complication(no-BPD group, n=250).

Results of analysis of infant’s characteristics were described by mean values and standard deviation.

This study has obtained ethical approval from the ethics committee of Semnan University of Medical Sciences.

BPD group had lower GA, birth weight, Apgar score at 1st  and 5th  minutes of life, as well as higher history of  resuscitation in delivery room, need for surfactant therapy, ventilator  dependency ,and more complications including IVH, NEC, pneumothorax and pulmonary hemorrhage, but there was not any statistically significant difference in infants  gender ,mode of delivery, history of GHTN, GDM, PROM>18 hours and antenatal bethametasone administration  and the rate of PDA between two groups.

MPV measured during  the first three days of life was significantly higher in the BPD group than in the no-BPD group (10.08_0.96versus 9.65_0.91 fL, p=0.033; ) but platelet count measured at the same time didn’t show any statistically significant  difference.(Table 1)

Table1  Clinical Characteristics, Complication Rates, and Platelet Count and Volume in Infants with or without BPD

Our study is one of the first  researches  that  investigates  the correlation between MPV and BPD in preterm infants with RDS. Our results showed that higher MPV during first three days of life is associated with higher risk of progression in to BPD in preterm infants with RDS, and infants in BPD group had lower birth weight, GA , Apgar score at 1 and 5 minutes of birth and more surfactant and ventilatory  supports than no-BPD group infants. But there was not any difference in platelet count between two groups. These findings are consistent with the study results performed by Dani et al In Italy3 and also Nouran4 et al in Egypt who demonstrated MPV was significantly higher in BPD than no-BPD group(12.3±1.4 vs 9.6±1.2 fl, p=0.001)in the first 24-48 hours of life. As Also in a study performed by Cekmez5 et al in Turkey MPV in the first day of life was higher in infants with BPD(9.8±1.3 vs 7.06±0.6)than in the control group.

Complications occurred during admission including IVH, NEC, pulmonary hemorrhage and   pneumothorax were also higher in the BPD group. This may be due to characteristics of BPD group such as lower birth weight, GA, and more severe RDS requiring more interventional modalities such as ventilatory  support and surfactant administration ,and finally common underlying inflammatory pathogenesis of this complications with BPD that make BPD group susceptible to this complications. Higher MPV during first three days of life in BPD group confirms previous studies which showed correspondence of higher MPV with disease activity and complications in rheumatoid arthritis and infective endocarditis in adults7,8and  correlation  between higher MPV and severe RDS 9and BPD development 3in preterm infants.

The final outcome of disruption of the alveolocapillary membrane integrity in RDS is a greater leakage of coagulative factors into the alveolar space and more alveolar fibrin deposition and hyaline membrane formation in preterm infants with the higher MPV. As fibrinogen  and derivatives are potent inhibitors of surfactant 12,13,Therefore high MPV during first three days of life may promote BPD development by worsening RDS through surfactant inhibition and increased mechanical ventilation and oxygen requirements, which in a viscous cycle leads to more inflammatory cells and platelet recruitment and eventually more fibrin depositions and destroying lung tissue by these cells and establishing BPD14,15.

The limitations of our study were small size of BPD group and inability to evaluate other possible factors influencing MPV and BPD correlation and finally not following up further MPV changes after three days of birth. We suggest performing further studies with larger BPD group and purposing other possible factors that predispose infants to BPD and serial MPV measurements   after three days of life.  If future studies could confirm our results, MPV might be used as an early inexpensive and simple measurable predicting marker for BPD development in preterm infants with RDS that makes the opportunity for right time intervention by measures such as using minimal oxygen concentration, weaning off ventilator as fast as possible and using medications (corticosteroid).

Conclusion: We concluded that higher MPV in the first three days of life is a probable  risk factor for the development of BPD in preterm infants with RDS. This might be because high MPV could favor inflammatory and oxidative lung damage.

The authors report no declarations of interest. 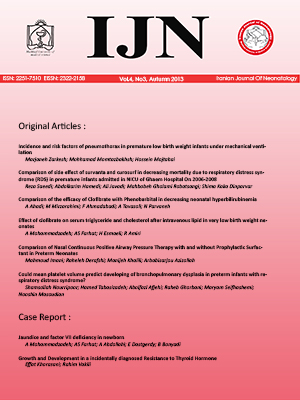