Comparison pregnancy rating with neonatal Characteristics in women with preeclampsia

Introduction: The increasing number of pregnancies can be dangerous for mother and baby. And  third and fourth pregnancies, increases risks for pregnancies. But given the lack of studies in this field, present study aimed" Comparison  pregnancy Rating with neonatal Characteristics in women with preeclampsia "to do.
Methods: This study is descriptive analytical. The research samples the available sampling method of women with preeclampsia , admitted in government  hospitals of Mashhad, 100 persons were selected and on the basis , pregnancy rating, with neonatal characteristics were compared. Neonatal characteristics questionnaire in the first 24 hours after delivery and two weeks after the delivery was completed. Data analysis by spss software and chi-square, Anova and Turkey's tests were performed.
Results:52% of subjects first pregnancy, 20% second pregnancy and 28 percent had high third pregnancy. pregnancy rating with  neonate NICU admission  and Satisfaction mother and wife of the baby's gender is a significant relationship(p< 0.05).But with sex and birth weight, infant feeding method, Satisfaction feeding, the first and fifth minute APGAR score was not correlated. Conclusions: Dissatisfaction of the mother and wife from baby's gender, with pregnancy rating was significantly relationship. Frequency of dissatisfaction  in women third multiparous  and higher, was most  and in nulliparous women was lower. Most babies admitted to the NICU were to mothers who were experiencing their second pregnancy.
KeyWords: pregnancy rating, neonatal Characteristics, preeclampsia.


Congenital heart diseases in NICU
Horri M1, Mottaghi Moghaddam H,
Farhat A, Haghbin A, KarimdadiS
Associated Professor of pediatric cardiology, Emam Reza Hospital, Mashhad,
Introduction: Congenital heart diseases (CHD) with spread of one percent are yet the important causes of morbidity and mortality in newborns and children despite of progress of science. In order to investigate frequency of CHD and effect on duration of hospitalization, we decided that this study is done.
Methods: This study is retrospectively done on references newborns from NICU to part of Pediatric cardiology in Imam Reza Hospital that is Tertiary referral center. From 230 cases, 107 cases were selected that it was completed information and done   echocardiography. Data were extracted and the results of them were analyzed.
Results :Fifty two of all participations (107) were male that mean and SD age of them were 11.76±10.36. The common of heart diseases consist of Defects of the heart septum(42%), PDA (40%),defects of  vessel large (19.6%), Dysrhythmia (9.3%)  ,  right and left rotten is respectively 14 and 4.7 percent . 14% of  participates were die and 51% with order of medicine and  justification were discharged and 35% of them in cause interference  were referred to Heart Surgeon .
Conclusion: CDH in newborns who were admitted has important effect into future of them and significantly increased the need of cardiac surgery of them,  in other hand, the mortality of them decreased. 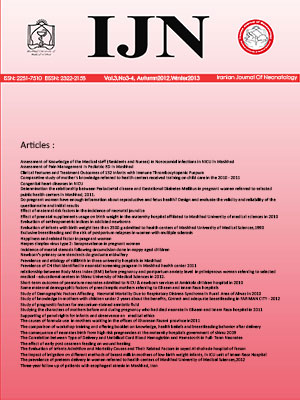