Introduction
Infantile colic is somehow believed to be the worst pain a baby has thus experienced. It is usually manifested as an acute abdominal pain with intense spasmodic cramping accompanied by intense crying lasting for more than 3 hours a day during at least a three days period. Accordingly, this study is aimed to investigate the effects of Fumaria on such pain in 3-16 weeks-old infants.

Materials and Methods
A double-blind clinical trial has been conducted on 60 newborns. The cases were selected through simple random sampling and divided into two groups, namely control and treatment group and given 2.5cc placebo or Fumaria extract. Daily symptoms were gathered and recorded via a specially designed questionnaire. Chi-squared test was used to analyze the mustered data.

Results
Out of the 60 cases, 50 newborns completely participated in the study. This study revealed a significant difference between the two aforementioned study groups as regards to the length and frequency of crying periods and the number of times an infant would wake up due to colic pain (P<0.05).
Concerning the demographic characteristics, there was no statistically significant difference between the control and the treatment group (p>0.05) .

Conclusion
It was revealed that Fumaria extract is of great help in reducing the colic pain in 3-16 week-old infants.

Infantile colic, as a behavioral syndrome, is one of the most important and meanwhile the most common disorders in the first few weeks to four months of an infant's life and rarely does it endure past six months of age (1). Hockenberry et al. have reported the prevalence of this disorder to be 15 to 40 percent (2) while Talachian et al.   have reported a 20 percent occurrence among the Iranian infants and newborns (3). In fact, colic pain in infants and newborns is identified as intense crying accompanied by physical symptoms such as facial redness, bending the knees up toward the stomach, and finger gripping for three or more hours per day, at least three times a week, within a three weeks period (4). Such symptoms may lead to physical disorders, distress, and sleeping disarrays in children (5). Furthermore, they may as well create numerous physical, emotional, and psychological problems in parents which can lead to child abuse or even disregarding the newborn (6,7).Based on theories, colic is believed to occur due to various factors, such as the infant’s being fed quickly, swallowing air while feeding, inappropriate position of the infant while being fed and the mother’s having emotional as well as nervous tensions. In general, colic is defined as a multifactorial disorder [2]. Several studies conducted on the issue have revealed the impact of both chemical and herbal medicines on decreasing this disorder in infants as well as newborns (7,8). Fumaria is one of such herbal medicines, which has a long background in the traditional medicine. Other than having beneficial features such as anti-microbial, antioxidant, and anti-inflammatory effects, Fumaria is known as an antispasmodic herbal medicine for the gastrointestinal system (9,10). Brinkan et al. conducted a study on the effects of Fumaria on the inflammatory bowel syndrome in 2005 and showed that taking 1500 mg Fumaria, three times a day for eight weeks had a considerable effect in reducing the pain resulting from this syndrome (5). Likewise, the results of a study conducted by Henschel et al. revealed the antispasmodic effect of Fumaria on the gastrointestinal system (11).Comparing to chemical medicines which have more side effects and the high cost of production, Fumaria can be used as a natural cost-effective treatment which has no side effects. Therefore, the present study aims to investigate the effects of Fumaria on sedating the colic pain in infants as well as reducing the parents’ and particularly the mothers’ dillema in taking care of such infants.

The present study conducted a double-blind clinical trial in six clustery selected clinics affiliated to Shiraz University of Medical Sciences. The population of the study was selected through the simple random sampling method. Thus, among the 3-16 weeks infants referred to the outpatient clinic in the selected centers, sixty who were suffering from colic pain were selected and examined by a physician in order to confirm colic pain and the lack of other disorders. Infants who suffered from other problems were excluded from this study. Fumaria extract and the placebo were prepared and encoded according to the table of random numbers. These codes were kept secret up to the end of the data collection by a pharmacist and were revealed after performing the analysis and preparing the report on the labels. After obtaining written informed consents from the infant’s mothers, control and treatment groups were established based on the these labels.A questionnaire including maternal age, occupation, education and also baby’s demographic information such as the age, sex, birth weight and status of the colic pain , frequency and duration of crying, bowel status and possible predisposing factors in creating the colic pain was designed and filled out.For medicine and placebo prescription, the cases were introduced to the pharmacy of the same clinic, and 2.5 cc of the Fumaria extract was prescribed for the infants to be taken three times a day for a week. Meanwhile, the mothers were required not to use any other types of medicines or treatments in this period. They were also given a booklet for daily recording of the colic symptoms. Finally, they were asked to refer to the clinic after the treatment period in order to hand in the booklet and, at the same time, evaluate the colic pain in the infants.In order to investigate the progression of the effect of the medicine, the information recorded by the mothers in the period of one week, including the frequency as well as the length of crying and the frequency of waking up due to the colic pain per day, were assessed. The study protocol was approved by the Ethics Committee of Shiraz University of Medical Sciences. The data were analyzed by descriptive statistics method using SPSS (version 15). Descriptive data were presented as mean standard deviation. P values less than 0.05 were considered statistically significant and the Chi-square test was used to analyze the data.

Out of the total 60 samples, 26 samples of the treatment group and 24 samples of the control group were enrolled in this study. There were approximately % 17 reductions in numbers of samples due to not referring to the clinic or not completing the booklet.

The demographic characteristics revealed an equal proportion of male and female infants in both treatment and control groups. The mean birth weight was measured to be 1.96±0.77 kg and1.75±0.89kg in the study and control groups as well respectively. In addition, 50% of the cases in the treatment group and %58 of the control group cases were the first children of their families. The most frequent age group was related to 2-month infants in both treatment and control group.Regarding the demographic characteristics of the mothers, the results showed that the mothers in the treatment group were mostly 20-30 years old (77%) housewives (88%), 61% of whom had high school education. In the control group, 87% of the mothers were 20-30 years old, 91% were housewives and 41% had high school education.Nevertheless, the results of Chi-square and Fisher tests showed no statistically significant difference between the demographic characteristics of the control and the treatment group (p>0.05) (Table1,2 ).

Concerning the specific goals and outcomes of the present study, the results of Chi-square test showed that after using the Fumaria extract, the frequency, length of crying and the occurrence of waking up due to colic pain were decreased in the study group, while they either remained unchanged or increased in the control group and there was a statistically significant difference between them. (P<0.05) (Table 3).

Table 1: frequency Distribution of Demographic characteristics of 4-16 week in infant with colic pain

Table 2: frequency Distribution of some demographic characteristics of mother with colicky infant

Considering the significant difference between the two groups regarding the frequency, length of crying and the occurrence of waking up due to colic pain -as the three major criteria for confirming the existence of colic pain-reported in the present study, one can claim that using the Fumaria extract can have a major effect on reducing the colic pain in the infants. Various studies conducted on the issue have also confirmed the remedy effects of this plant on animals. The studies performed on animals have claimed Fumaria to be an effective medicine for treating the spasmogenic processes. For instance, Rao et al. conducted a study on mice and reported both antispasmodic and anti-inflammatory effects for Fumaria extract (11,12). In another survey, Angha et al. carried out a research and showed that both the extract and oil of Fumaria have anti-bacterial effects (13).In addition, comparing the effect of Fumaria with other similar herbal medicines depicts the superior effects of Fumaria on reducing the length as well as the frequency of crying and occurrence of due waking ups in infants. For instance, Garner et al. conducted a study on a specific type of tea including Chamomile, Vervain, Licorice and Lemon balm and concluded that this type of tea would not affect the frequency of waking ups, while it would reduce the other symptoms in the infants (14). Another study was conducted on the effects of Fennel seed oil on reducing the colic pain in the newborns which showed that although the compound could let to the reduction of the colic pain, it would decrease the rate of the crying times in the infants of the study group (7).Acupuncture, considered to be a new treatment for colic is proved to be less effective by Lungern et al. in a study in 2011 which revealed that this treatment had no impacts on reducing the frequency of the infant’s waking up due to colic pain (15).Considering the 15%-40% prevalence of colic in the infants and, consequently, the increase of its due problems for the child as well as their families (2), the Fumaria extract which has antispasmodic effects according to Gilani et al. (16), can be introduced as an effective herbal medicine for reducing such problems.

The Fumaria extract, as a cost-effective traditional medicine, can be highly effective in treating the colic pain in the newborns. 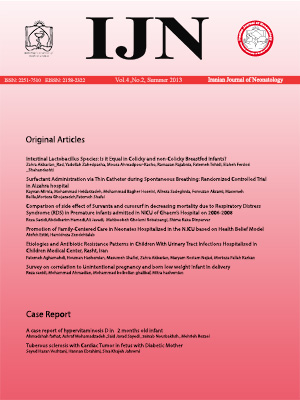